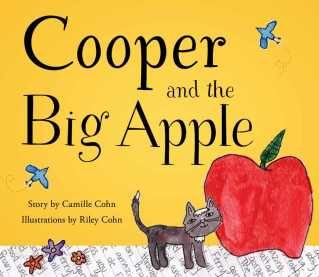 Cooper the cat is purrfectly content with his life in Texas. So when his best friend, Jennifer, tells him they’re taking a trip to New York City, he’s not really sure what all the fuss is about. But, like a good friend, he embarks on the new adventure with her. Jennifer takes Cooper to climb the Statue of Liberty, to visit the Stock Exchange, to attend a Broadway musical, and to see many other New York City landmarks. At each new location, Cooper realizes the Big Apple is not what he expected and even more than he imagined!

Cooper and the Big Apple, is a picture book about a cat who reluctantly goes on a trip to New York City. Throughout his trip, Cooper is confused by the many figures of speech and nicknames used to describe the landmarks of the city. You see, Cooper is on the Autism Spectrum (like most cats) so what transpires is a hilarious look at the world through the eyes of a literal thinker. Cooper’s confusion changes to amazement when he realizes that experiencing new things can be fun and educational, even though he never gets his bacon and egg breakfast at Tiffany’s.

Cooper and the Big Apple is a fun way to approach figurative language in the tradition of Amelia Bedelia, but with a more visual nature. It is also a great way for children to learn about the literal/visual thinking that children on the autism spectrum deal with every day.

The illustrations for Cooper and the Big Apple were created by Riley Cohn, a 15-year old who just happens to have Autism. Cooper and the Big Apple has the capacity to give its readers a glimpse of what it is like to see the world through the eyes of a person with Autism in a lighthearted way. In addition, the fact that the book is illustrated by a young person with Autism, sends a positive message that anything is possible and that being different, doesn’t mean you are less.